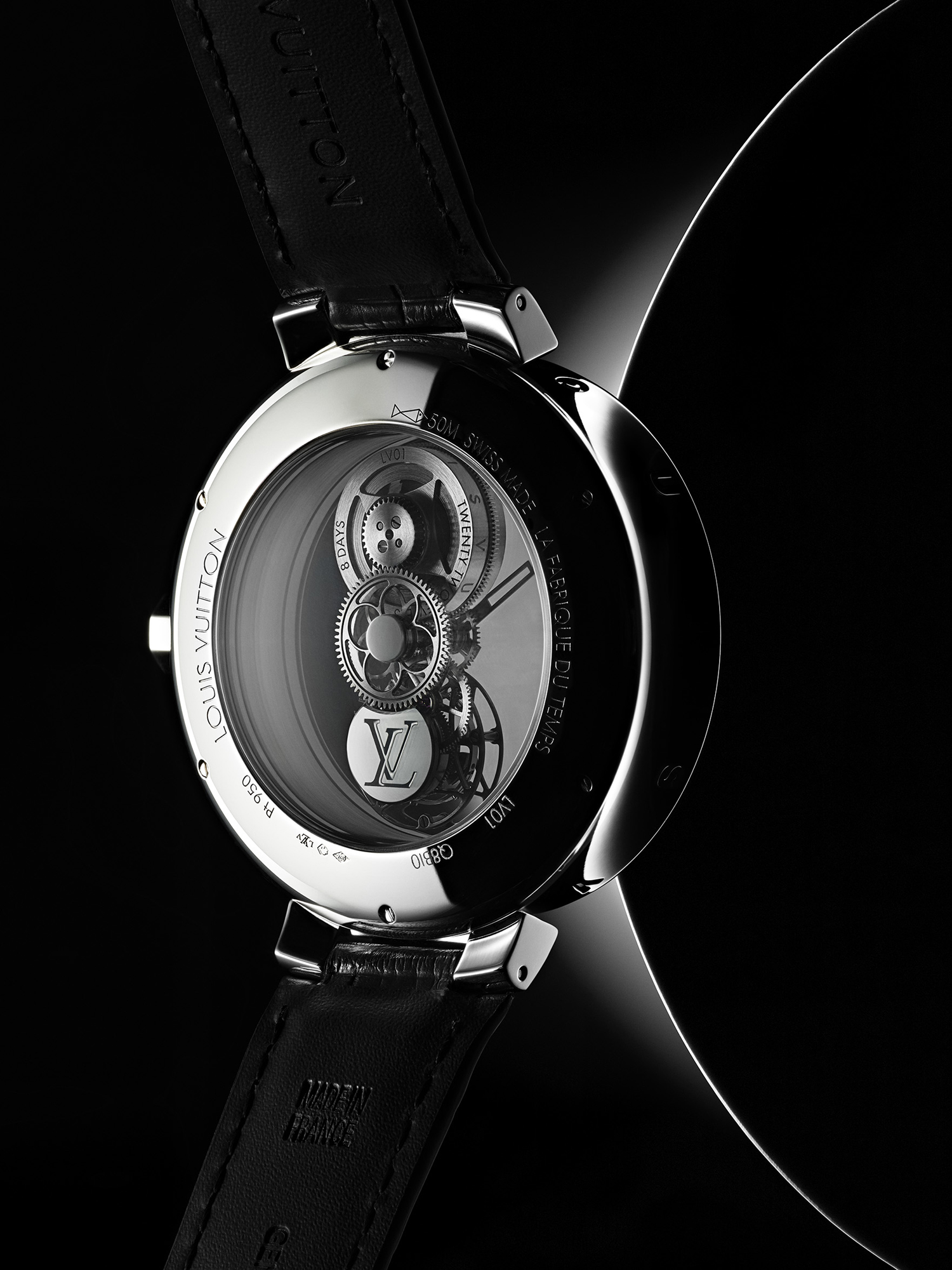 Cartier might have popularised the concept of mysterious timekeeping but it appears that Louis Vuitton is taking a leaf and expressing horological expertise with a new adventure in watchmaking with the Louis Vuitton Tambour Moon Mysterieuse Flying Tourbillon. 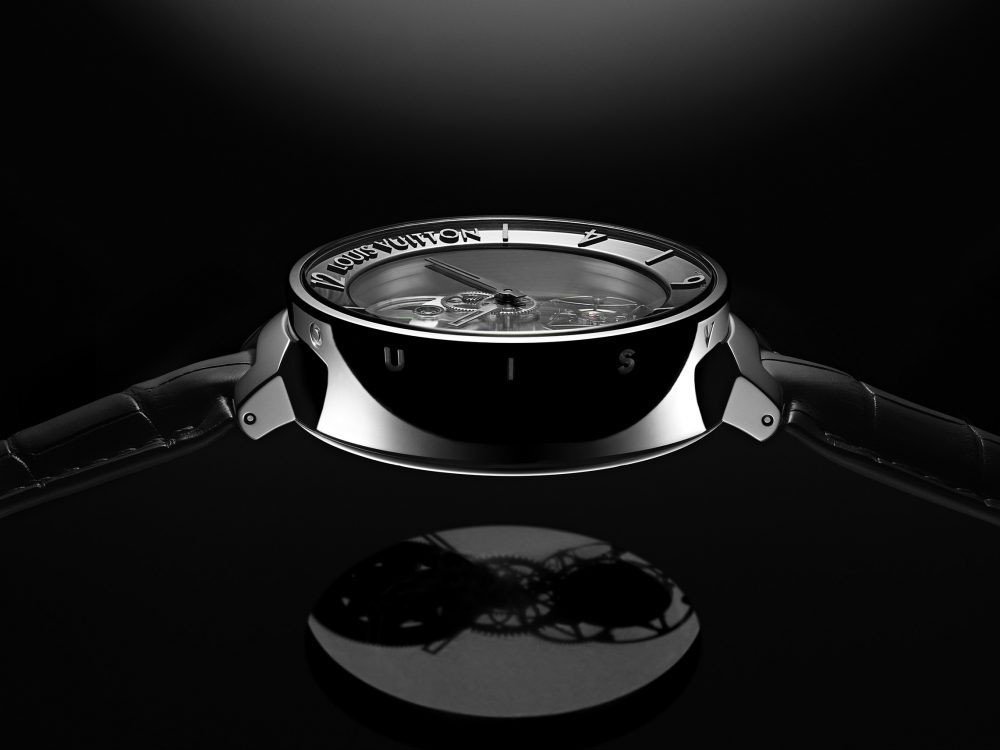 It marks a decisive step forward in the wonderful world of high watchmaking through adaptation of the principle of the mysterious movement, arranged in a line and combined with a flying tourbillon escapement. Developed in the 19th century, mysterious movements traditionally make the hands appear to levitate. This fascinating optical illusion is made possible thanks to a clever mechanism of crystal discs, today replaced by sapphire crystals. This applies to the LV 110 caliber in its entirety. 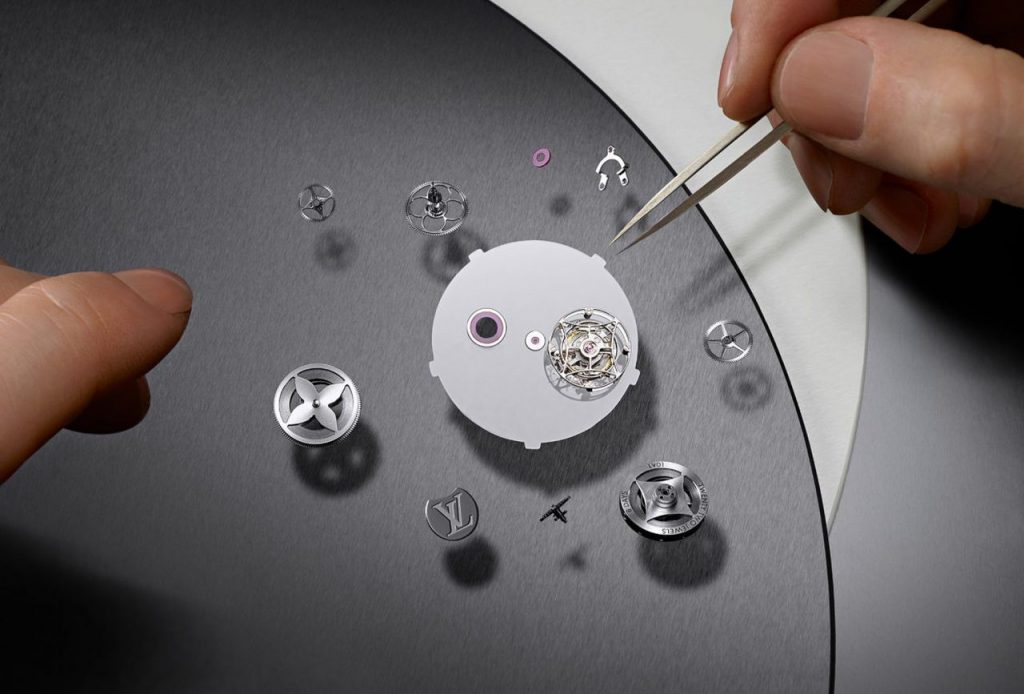 Developed in the 19th century, mysterious movements traditionally make the hands appear to levitate. This fascinating optical illusion is made possible thanks to a clever mechanism of crystal discs, today replaced by sapphire crystals.

This applies to the LV 110 caliber in its entirety. Developed and crafted by La Fabrique du Temps Louis Vuitton, the co-axial double barrel concealed beneath a Monogram Flower situated at 12 o’clock of the 45mm Tambour Moon , perpetuates the brand’s signature motif. Meanwhile, the central wheels dedicated to the hours and minutes, as well as the tourbillon carriage at 6 o’clock, appear to float in mid-air.

A lightweight creation reinforced by two stylistic effects: the absence of a connection between the winding crown and the double barrel, and the choice of a flying tourbillon whose carriage, performing a complete rotation in 60 seconds, is adorned with an openwork Monogram Flower.

Adorned with a black alligator strap, the manual winding Tambour Moon Mysterieuse Flying Tourbillon driven by LV 110 calibre with eight-day power reserve offers watch enthusiasts another surprise: the back of the tourbillon carriage may be personalized with the customer’s initials. 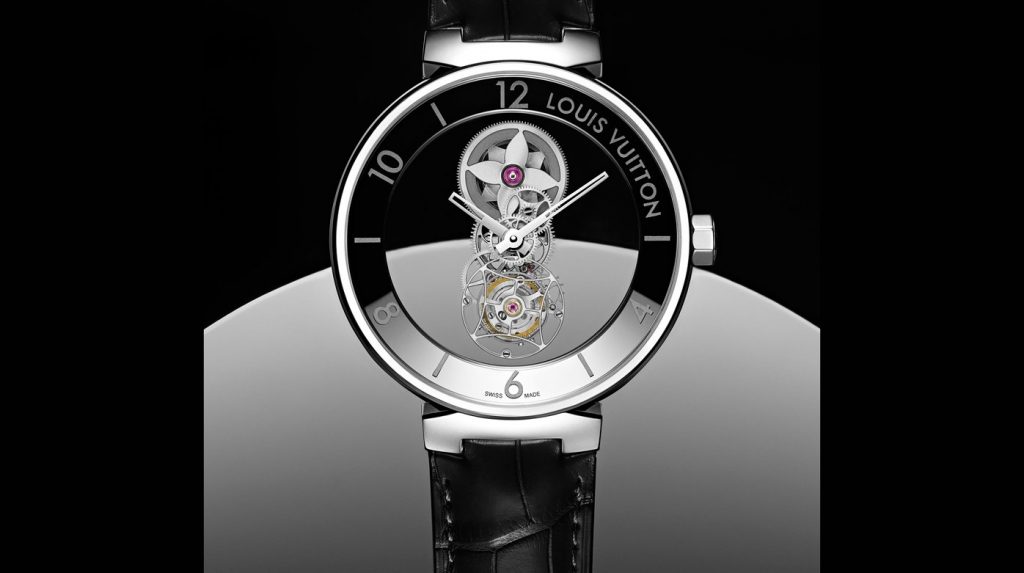 Beyond the cryptographic flash, LV’s newest timepiece displays arch design chops; the movement and flying tourbillon escapement are fairly stunning, and represent considerable mechanical development. The watch’s mysterious movement makes it appear as if the hands are levitating. The floating appearance is heightened with a Monogram Flower set at 12 o’clock. Graceful, indeed.

And, the mystery explained? The appearance of levitation comes from a special arrangement of sapphire crystals, part of the construction behind Louis Vuitton’s mechanical 110 caliber. How the company manages to reconcile art nouveau and contemporary sensibilities so effectively might be the real mystery, in the end.

Tambour Moon is 45 mm in diameter and boasts a concave platinum case. The look is completed with a black alligator strap.